All through Judge Heyburn’s Opinion he referred to the LSIORBP as an exceptionally significant project: The Court had serious questions as to CART’s standing through member Mattie Jones to make discrimination claims, but, “Again, due to the public nature of this suit and the import of CART’s Title VI claims, the Court will nevertheless address their substance.”

Oral argument can be granted and used as a basis of decision along with the parties filings, or the Court could decide the case based merely on the documents. In this case the Court of appeals three judge panel has scheduled oral argument for June 25th. This appears to indicate that specific issues need some discussion to enhance the meaning of the claims and defenses and any error of the lower Court.

Threshold issues include the concept of ‘standing’ of CART to obtain relief. CART’s affidavits should establish its standing for the NEPA claims with little problem, but the intentional discrimination claims require more discussion.  A statutory right of action is provided for ‘persons aggrieved’ by the final decision of a federal agency under the Administrative Procedures Act (APA). CART is well based in the law to challenge the LSIORBP final Revised Record of Decision issued by FHWA in July 2012. 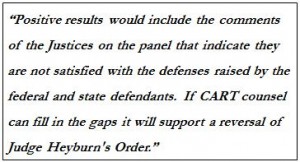 Statute 42 USC 2000d-7 provides a right of action to allege intentional discrimination and obtain judicial review of the use of federal funds in the LSIORBP if they were used in a way that denied benefits of the project to protected races, in our case, Blacks in the West End of Louisville. Both standing and injury will likely be issues the Court of Appeals will want to explore in oral arguments.

What are some positive results that could result from the oral arguments phase?

Positive results would include the comments of the Justices on the panel that indicate they are not satisfied with the defenses raised by the federal and state defendants. If CART counsel can fill in the gaps it will support a reversal of Judge Heyburn’s Order.

The importance of this case can be considered:

Between 2003 when the original project Record of Decision was approved and about 2011 when the same project Purpose and Need and alternatives favoring highway bridges was reapproved by KYTC and INDOT several major changes occurred:

1) Louisville did an inventory of its greenhouse gas emissions and found them too high. It also found mobile sources contributed roughly a third of emissions and determined to lower them eventually by 20%. It decided to favor public transit alternatives to reduce GHG.

2) The Louisville economy was severely impacted by the housing bubble and credit default swaps banking crisis that led to widespread unemployment in the West End and vacant and abandoned property and housing foreclosures disproportionately affecting West Louisville.

3) Science advanced on the detection and monitoring as well as the severe health impacts of mobile source particulate emissions. Unregulated ultrafine and nano-particulate combustion particulates are documented as ‘significant impacts’ of major highway corridors with particulate count concentrations of hundreds of thousands per cubic centimeter in highway corridors. UFP pass through cell membrane into the blood stream and brain tissue and the health effects are cumulative and serious.

4) The alluvial aquifer at the water company riverbank filtration facility at Prospect lies  directly under the East End Bridge Kentucky approach. This drinking water source for Louisville is placed in jeopardy of catastrophic contamination by a hazardous cargo  spill on the Kentucky bridge approach. Road salt and other chemical runoff is discharged to Harrods Creek in wet weather with excedences of  water quality limits.

5) Nationally and locally, due to economic and social/cultural changes the overall traffic  forecasts that justified the 2 bridge project (in KYTC and INDOT minds) did not play out as expected. Starting about 2007 actual traffic counts on I-65 dropped from a high of 136,000 to 122,000 in 2012. The 2003 ROD and 4.1 billion dollar project of two bridges was based on forecasting that included 14,000 more cars on I-65 and expected increases to 2030.  The 2003 decision finding a need for both an East End Bridge and doubling the Downtown span was properly questioned when re-approved in 2011 after traffic counts dropped. 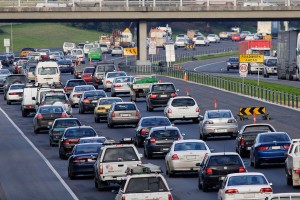 6) One East End Bridge was affordable with currently available funds in 2003 and could have been built and in operation with no tolls. That would have reduced congestion on I-65 even further below the 14,000 cars already subtracted by economic changes. An un-tolled East End Bridge would  subtract as much as 45,000 cars per day from the Downtown crossings thus dramatically improving peak hour congestion problems. Going ahead with funding a second Downtown parallel bridge added a billion dollar tolling system and some 7 billion dollars of provate financing until 2058 or longer.

What is the likelihood of success and what would success look like?

The likelihood of prevailing on these claims is restricted by the deferential judicial review standard applied to federal agency decisions which are expressed more fully below in an excerpt from Judge Heyburn’s Memorandum Order. CART’s members who want cleaner air, more socially just public transportation connections to suburban job centers, safe drinking water and a rational approach to climate change, may not get those things because appointed transportation officials are  given substantial discretion to plan and fund the system.  And the system in Kentucky remains quite one dimensional with virtually all resources spent on roads, highways and bridges to accommodate personal automobiles and commercial trucks.

The LSIORBP started out as the Ohio River Major Investment Study in 1998. At each step of the way, the process was guided by professional contractors thoroughly familiar with the federal law and the requirements and hazards of NEPA review. They were paid millions of dollars to construct a project that citizens could not undo through judicial review. The two contractors were JHK Associates for the ORMIS process and Community Transportation Solutions for the NEPA process. KYTC and INDOT spent millions with both contractors to perform risk avoidance and deliver a successful project that would clear any court challenge.

CART’s position in this appeal is that real benefits would follow the voiding of federal approval of the RROD. Those benefits would renew the possibility of a cross river public transit project as part of a settlement or decision. The main damage of this decision in violation of NEPA and Title VI is still to come as Louisville commits to further sprawl development with dirty air and water, and the one fifth of the population living below poverty is not provided low cost mobility and induced economic development that enlightened transportation planning can provide.

In reviewing agency decision making, the Court must apply a “‘rule of reason’ standard, which allows for a deferential review of an agency’s compliance with the NEPA requirements.” Audubon Naturalist, 524 F. Supp. 2d at 662; see Save Our Cumberland Mountains v. Kempthorne, 453 F.3d 334, 346 (6th Cir. 2006). Under this standard, if the agency’s objectives and actions are reasonable, the Court should not disturb the agency’s judgment. In sum, “[t]he role of the courts is simply to ensure that the agency has [complied with NEPA by] adequately consider[ing] and disclos[ing] the environmental impact of its actions and that its decision is not arbitrary or capricious.” Baltimore Gas & Elec., 462 U.S. at 97.10