CART believes that the final Move Louisville plan will be THE master plan for Louisville Metro transportation for decades to come.  Of course, KIPDA will have to bless new projects that require federal and state funding (which would be a lot) and a process for getting the regionally oriented agency to place Louisville projects on the Transportation Infrastructure Plan (TIP) needs to be hammered out.  But in spite of the bureaucratic nature of transportation planning, the destiny of Louisville’s transportation system, and a major clue to whether or not this city will close the chapter on auto-centric sprawl, is in the hands of the Move Louisville team.

We cannot stress enough how important local knowledge and input by community stakeholders is.

The team includes TARC, Metro Economic Development & Innovation, private consulting groups*, and the public. CART representatives have attended most of the public workshops and along with others have found that (1) public input opportunities are widely available, (2) the professional team has benefited from public input in many ways and (3) public input has for the most part been integrated into the draft project candidate map. We cannot stress enough how important local knowledge and input by community stakeholders is.  At the time of this writing the professional team is “sequestered,” making adjustments, doing cost/benefit analyses, fine tuning ideas to better integrate transportation modes, evaluating project’s alignment with goals and deciding which projects will make the first cut. 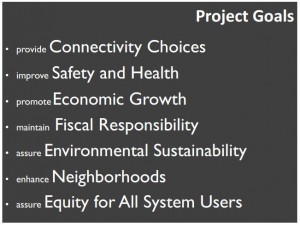 There are a number of mass transit ideas on the table including two transit hubs downtown, three streetcar lines and the Dixie Highway commuter rail project is still alive.  Conversations with team members indicate a bias toward Bus Rapid Transit (Broadway and Dixie Highway) as well as “Rapid Bus” and enhanced bus service that together are sometimes referred to as “BRT-lite.”  There are a large number of road and highway projects being considered, mostly cut and pasted from the current KIPDA transportation plan but there are some creative projects like the 9th street rehabilitation.  The key drivers at this time for road and highway construction are the need to provide ease of freight movement for industry and fulfillment centers, and developers’ desire for expansion of development beyond Floyds Fork and other undeveloped land.    Bicycle and pedestrian facility plans, both recreational and commuter friendly, are plentiful and opportunities for integration with transit are there but have yet to be articulated.

All projects are supposed to satisfy 7 goals but is unclear how they will be measured.  CART submitted a feedback document to the Move Louisville Team in late April that expressed some of our concerns and rated a number of the projects using a metric scheme developed by CART members.  Our purpose was to put the project team on notice that lofty goals need to be observed in the project selection process. Adherence to the goals has tremendous implications when it comes to social justice issues and integration of smart growth principles in land development rules.

On May 29th, the Move Louisville team published the “MOVE LOUISVILLE MULTIMODAL TRANSPORTATION PLAN Fact Book.” It is an interesting document that we will review in more detail in a later post.  It analyzes Louisville’s past and present development trends and presents best practices that reflect contemporary thinking about urban planning.  There is also a significant amount of ink devoted to the need for transportation solutions that address climate change and air pollution. The document illuminates some inconsistency between KIPDA growth projections and existing neighborhood plans, a disconnect between what residents desire and what growth models predict, that needs to be “coordinated.” The objectivity of the Fact Books is encouraging.

The final Move Louisville plan will contain guiding principles that will be a companion to the Complete Streets guide, Cornerstone 2020, and influence the next comprehensive plan. While there is no shortage of well-meaning plans sitting on the shelf we expect that ideas that are not a part of the final Move Louisville plan will be hard pressed to make it to the drawing board.  That means that whatever you favor for your neighborhood, now is the time to mobilize.  We call on everyone who has an interest in the future of Louisville’s urban landscape to review the online documentation and take part in the next public meetings.  There are no scheduled times and dates as of this writing but are expected to commence in July. Review the documentation that is online and contact us if you have questions.